Whether in astrophysics, materials science, quantum information science, quantum encryption, medical imaging, DNA sequencing, or in fiber-optic communication: Single-photon detectors (SPD) provide a timing signal from which, for example, fluorescence lifetimes of excited matter can be deduced (FLIM). This is the perfect job for our TDCs and in some applications already our "entry-level"-device can be employed.

At this point, we would like to give visitors to our website who are interested in the possible applications for our products a little insight. We ourselves are primarily concerned with the requirements of our customers with regard to data acquisition and are neither chemists, biologists, or medical professionals, nor do we build mass spectrometers or imaging systems. We just enjoy learning from our customers and sharing what we have learned with those who are interested in our work. The following contents are therefore not scientific treatises, but also reflect subjective impressions.

Time-correlated single photon counting (TCSPC) is a widely used technique for the time-resolved measurement of fluorescence. The particularly high time resolution that is achieved today is a special feature of this technology. This method achieves the technically feasible state of the art in many aspects - e.g. individual photons are recognized. This measurement method is used as an essential part of imaging techniques such as FLIM (fluorescence lifetime microscopy). Time-Correlated Single Photon Counting is a particularly non-invasive measurement technique because the light pulses required for sample excitation have low energy. The aforementioned single-photon detection also contributes here.

In detail, TCSPC is based on the detection of the arrival times of the photons on a detector. The time of emission of the laser pulse is usually taken as the reference signal, which thus reflects the time of excitation of the sample. The sample is excited with the laser pulse at a high repetition rate. The high repetition rate is of great advantage in order to obtain a statistically significant course of the de-excitation behavior of the sample (in the shortest possible time) from the single-photon measurement. Fluctuations in the source intensity and the resulting measurement errors are also compensated for by the enormous frequency of measurements. To measure the photon emission times, TDC systems are used on the one hand and fast ADCs in the Gsps/s range on the other. 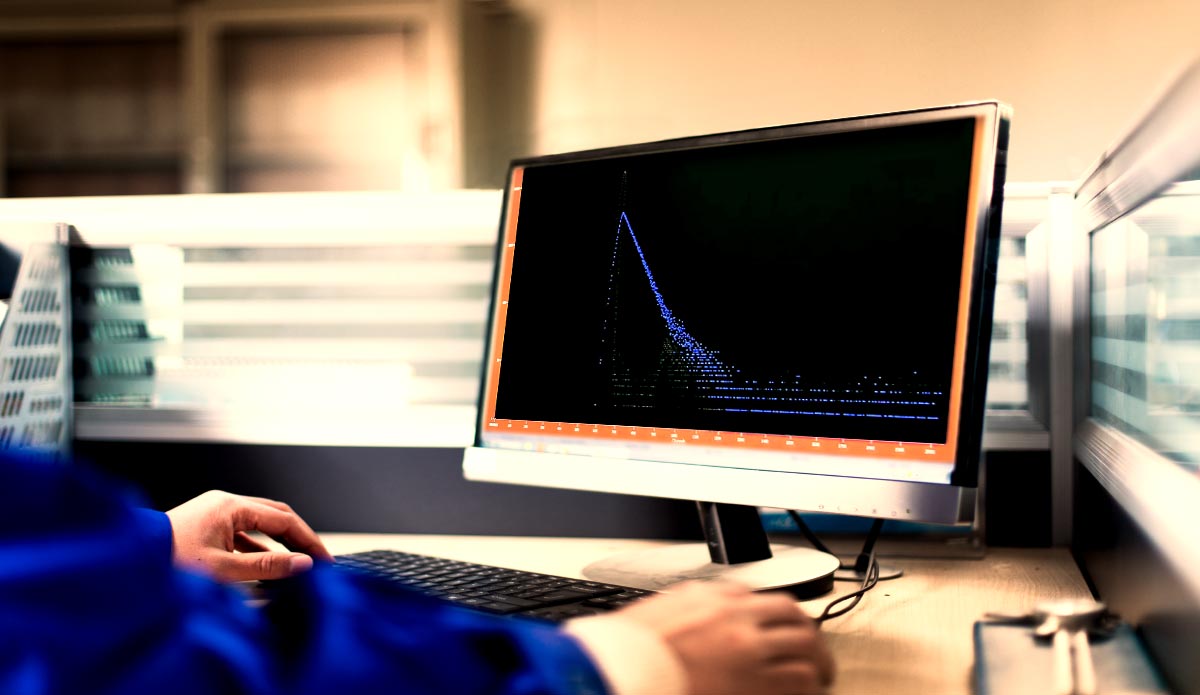 Analysis of decay data making use of TCSPC.

In Time-Correlated single-photon counting, individual photons that are emitted after a periodic excitation of a sample are recorded in order to determine the temporal evolution of the de-excitation behavior of that sample.

In order to obtain statistically meaningful results, many such individual photon-measurements are carried out over a certain period of time, so that the approach allows for detection of changes in the emitted light intensity, which occur very quickly. The goal of TCSPC is to investigate photon emission processes that typically take place in the picosecond range.

‍
The main application is in the field of fluorescence lifetime measurements (photoluminescence decay measurements). Today, TCSPC technology surpasses most other techniques in terms of sensitivity, dynamic range, and precision.

The already mentioned time delay between excitation and photon emission (here called emission time) is measured with an extremely high time resolution. The excitation of the sample is done by employing a short laser pulse. Its intensity is chosen such that many of these pulses do not excite the sample - as a rule of thumb, more than 95% of all pulses do not interact. Accordingly, typical pulse repetition rates are much higher than the photon exchange rate. This scheme ensures that, only one (or fewer) fluorescence photons are generated per excitation shot, and that photons that originate from a previous excitation pulse can be identified and discarded. In order to obtain statistically significant results, the individual measurements are repeated several million times.

‍
The individual measurements are sorted into a histogram which shows how often each emission time occurred. The TCSPC-concept can also be used for imaging methods, such as FLIM.

These are the advantages of TCSPC measurements:

In order to achieve high temporal resolution in the measurement of the emission time constant fraction discriminators are used: Most detectors provide analog signals (typically short pulses) which need to be converted into digital information on the arrival time of a photon. The detector signals typically have a broad distribution of pulse-heights. A constant fraction discriminator generates a digital timing signal when a fixed fraction of the pulse height is reached. Pulse height fluctuations either due to light source instabilities or due to the intrinsic pulse height distribution of photomultipliers are therefore largely irrelevant.

TCSPC is mainly used in single-molecule detection and spectroscopy as well as in fluorescence correlation spectroscopy. In addition to the investigation of fluorescence lifetimes (i.e. FLIM), time-correlating single photon counting is used for fiber optic research in order to investigate the time course of pulsed or modulated light (see also optical time-domain reflectometry, quantum research and quantum key distribution).

TCSPC is mainly used in single-molecule detection and spectroscopy as well as in fluorescence correlation spectroscopy (FCS). In addition to the investigation of fluorescence lifetimes, time-correlating single photon counting is used for fiber optic research in order to investigate the time-domain properties of pulsed or modulated light. 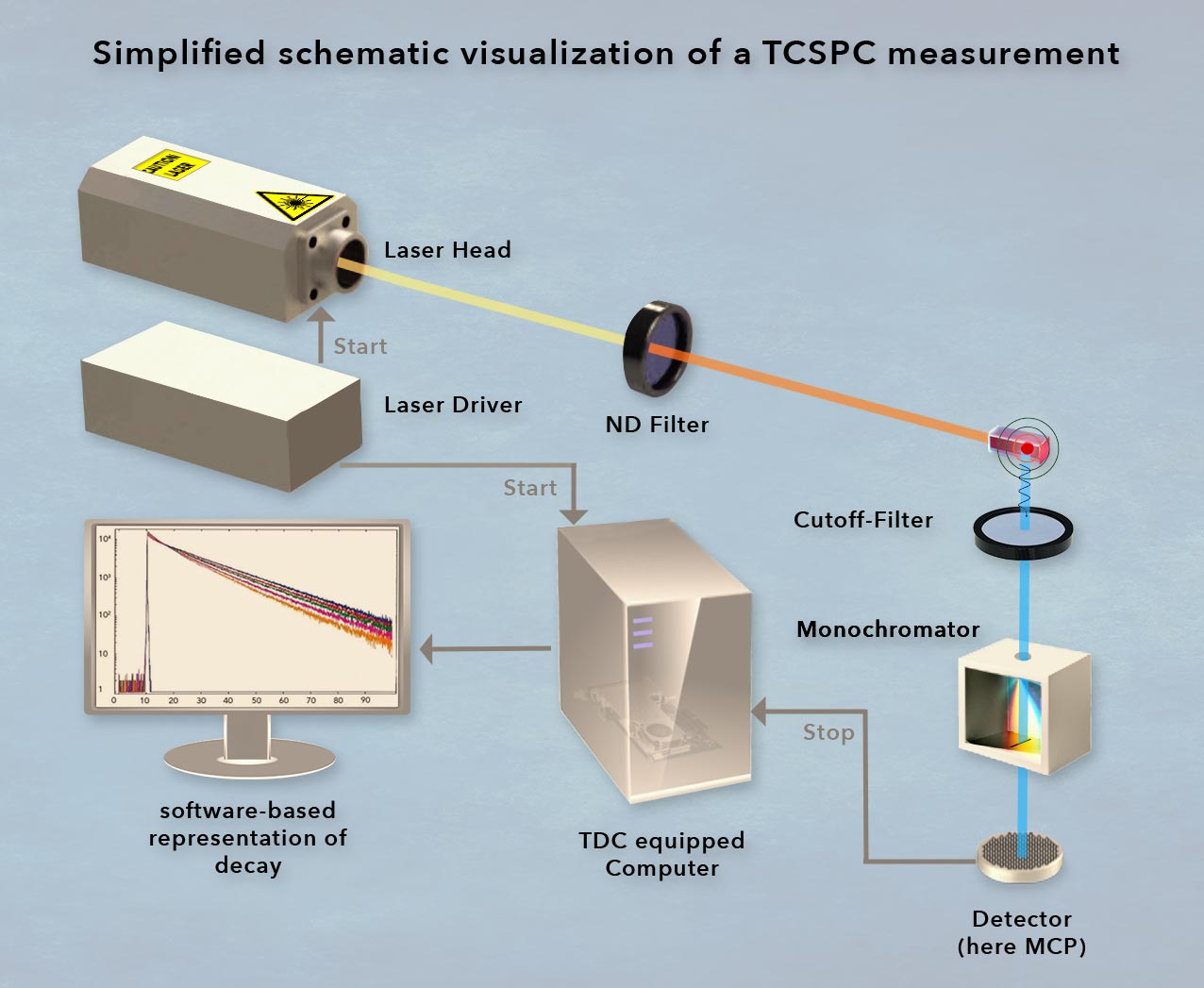 Scheme of a TCSPC decay measurement

Laser sources, sometimes femtosecond lasers, serve as the source for exciting light. When choosing the laser sources, the excitation energies of the sample and its expected fluorescence lifetime play a decisive role.
With a high repetition rate (usually in the range of 1 - 100 MHz), the laser sends a start signal to a computer at the same time as the pump pulse is emitted from the source. This start pulse triggers the time measurement.
‍

The laser pulses are typically shorter than 0.1 ns and are directed onto the sample via a neutral density filter. The filter suppresses stray light that could falsely trigger the detector and attenuates the excitation pulse accordingly. If a photon is emitted from the sample within a pulse cycle and hits the detector, this triggers the stop signal of the time measurement.  In front of the detector, the so-called cutoff filter, which limits the measurement to the relevant spectral range. In some measurement setups, the light emitted by the sample molecule passes in addition to a monochromator in order to provide information on the emitted wavelength.

The synchronization of the measurement signals and their digitization is implemented with the help of fast, high-precision data acquisition technology, which yields histograms of the recorded timing data in the end- this is the core competence of cronologic.

The following photon detectors are used for TCSPC measurements:

Special attention should be paid to possible measurement errors due to the effect of the so-called "pulse pile-up" during a TCSPC measurement:
‍
If two or more photons are emitted within a very short time interval, it can happen, for example, due to dead times of the data acquisition system, that individual photons are not recorded. The resulting measurement error can systematically alter the recorded histogram since mostly the photon “arriving later” is lost. The problem of the “pile-up” of photons can be avoided by reducing the excitation intensity (and thus the percentage of photons that are emitted from the sample). Accordingly, TCSPC setups are designed in such a way that only a fraction, often only one, of 50 excitation pulses generates a fluorescence response.

The individual counts are recorded in time bins with the help of their timestamps generated by the TDC and displayed accordingly.

TCSPC measurements: then and now

In order to register the arrival time of the fluorescence photons relative to the excitation time of the sample, electronics with the highest possible resolution are used. Initially, the TCSPC-data was recorded with the help of a TAC (Time to Amplitude Converter) and a transient recorder (Analog to Digital Converter, ADC):

The signals containing the information on the emission time are processed by a constant fraction discriminator (CFD). The reference pulse then activates the TAC. The TAC internally generates a voltage ramp on a capacitor, whereby the voltage rise is stopped as soon as the fluorescence photon from the sample is detected. The TAC voltage is then evaluated by an ADC and converted into a digital timestamp. A higher voltage equals a later emission time. In the reverse TAC mode, the roles of the excitation pulse and the detected photon are reversed. In this case, the excitation pulse stops the voltage increase in the TAC.  The recorded timestamp can be processed further in a multi-channel analyzer (MCA) for histogramming. This classic measurement method has a comparatively long dead time.

Newer TCSPC systems use the fast and efficient data acquisition concepts of modern TDCs (Time to Digital Converter/time interval analyzer), which convert the arrival time of the timing signals directly into digital timestamps. Due to the short dead times of modern TDCs, it is sometimes even possible to record several photons per excitation cycle. If necessary, additional information can be recorded for each photon detection event, e.g. the light’s wavelength, its polarization, its position within an image area, information on sample properties, the excitation wavelength, etc. This results in a manifold of further options for displaying and analyzing the measured data.

The limits of TCSPC measurements

The resolution of TCSPC measurements is limited by various factors, the sum of which is referred to as the  IRF (Instrument Response Function):

The IRF time sum can be obtained typically in-situ by performing a measurement of the “prompt”.