In many TOFMS units, cronologic TDCs or ADCs are used to measure precisely the arrival of single ions. From the arrival time, the ion’s time-of-flight is deduced, from which the mass-to-charge ratio of the detected particle can be determined. A crucial factor for a successful measurement is the extremely low cycle-to-cycle jitter of our TDCs and their very low multiple hit detection dead time.

‍When it comes to finding out the composition of unknown substances, mass spectrometry is used in most cases. This applies to the checking of chemical compounds during their production and to the analysis. For this purpose, the mass of individual atoms or molecules of a sample is precisely determined. TOF mass spectrometry (TOFMS) offers advantages in terms of accuracy and sample throughput in automated measurement methods, e.g. for high-throughput screening tools. Modern mass spectrometers often work in several stages (tandem MS, MS / MS). Particularly precise are measurements in which isolated ions are examined with a subsequent TOF measurement.

The field of TOF mass spectrometry comprises a large number of sophisticated measurement schemes that have been optimized for their respective area of ​​application. In many analyzers, for example, the actual TOF measurement is preceded by a coupled chromatographic separation of the sample. The TOF-MS is coupled with gas chromatography (GC-MS), liquid chromatography (LC-MS), ion mobility spectrometry (IMS-MS), or with capillary electrophoresis (CE-MS) or a combination of such separation approaches. This initial separation is particularly helpful when evaluating very complex samples, e.g. in food analysis. In all of these cases, however, at the heart of the devices and the key to their precision is ultimately the time-of-flight analyzer.
‍

In a time-of-flight mass spectrometer, ionized atoms or molecules of a sample are separated on the basis of their mass-to-charge ratio during the passage of a flight tube, so that ultimately their mass can be determined from a measurement of their time of flight. When entering the analyzer (which consists conceptually of an electric field with known strength), the ions obtain kinetic energy proportional to their charge. After the passage of the electric field region, all ions have the same kinetic energy. However, their flight times depend on their mass such that light ions are detected earlier than heavy ions. This is the case with ions of the same charge. The measured time of flight (TOF) is recorded and is proportional to the square root of the mass of the molecule.

On the most basic level, time-of-flight analyzers essentially consist of a tube that contains a high vacuum and is equipped with an extremely fast ion detector at its end.

Animation of a MALDI-TOF measurement. The Ionized particles are separated on the basis of their mass-to-charge ratio during the passage of the flight tube and hit a micro-channel plate detector. Data acquisition electronics records the number of impacting ions and builds up a histogram.

Regardless of the exact design of the time-of-flight analyzer, the sample substance goes through the following steps within a very short time. (see animation above):

As already mentioned, modern TOF systems have a much more complex structure than the flight tube shown in the animation. For example, before time-of-flight measurement, quadrupoles and similar arrangements are used for selective mass separation. These can also be used to focus the ion beam, e.g. for targeting a collision cell in order to record flight times of the fragments that are extracted from there.

The flight distance is often extended by employing so-called reflectrons, which increases the sensitivity of the TOF measurement and compensates for the energy dispersion that occurs in the acceleration phase.

See graphic: A reflectron reverses the direction of the ions by creating an electric field with a gradient. This reduces the influence of the ions’ kinetic energy distribution on the flight time. A single-stage reflectron uses a homogeneous field and can compensate for small energy fluctuations. By using an ion mirror, a higher energy ion (red) travels a longer distance but arrives at the detector at the same time as the ion of lower energy with the same mass (green).

How is ionization of the sample implemented?

Depending on the area of application and the chemical, biological or physical properties of the examined sample, different ways of its ionization may be considered. If the sample is not already in the gas phase, it must be first be vaporized or nebulized. The sample substance is then typically ionized by particular collision (electron impact ionization), protonation (chemical ionization), or by means of strong laser light. Ideally, this process yields singly charged ions.

Here is a brief overview of various ion sources:

Since extensive further developments are taking place with regard to ionization techniques, this list does not claim to be exhaustive.

‍
Which detectors are used?

The separated ionic components are characterized by measuring their time of arrival at the end of the flight path using a detector. Several types of detectors are available for mass spectrometers. 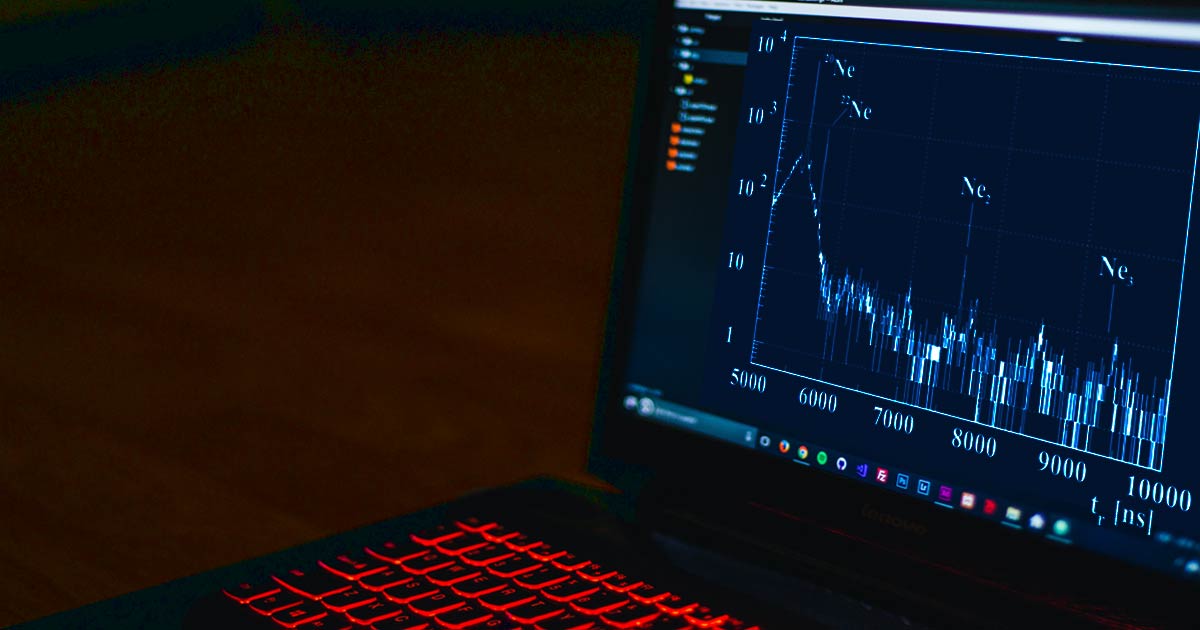 The time-of-flight distribution of neon ions after photoionization shows peaks for isotopes and the neon dimer. At the position of the expected flight time for the neon trimer, there is no clear peak from the noise.

How are the data recorded in TOF mass spectrometry evaluated?