We are quite proud that our time to digital converters resolve so accurately that they are suitable for comparing atomic clocks. This applies in particular to modern measurement methods, such as two-way satellite time and frequency transfer.

At this point, we would like to give visitors to our website who are interested in the applications of our products a little insight. We ourselves are primarily concerned with the data acquisition requirements of our customers and are not geodetic scientists or involved in high-speed trading, nor do we build atomic clocks or satellite navigation systems. The following content is not to be understood as a scientific treatise but is a simplified presentation of these applications and might also reflect subjective impressions. This article was supported by the Time and Frequency Department @ PTB.

All common clocks work according to a similar principle: They use a periodically occurring event, which is counted and their frequency is assigned to a second. Only with the help of atomic clocks time has become the physical quantity that can be measured most precisely. The time pulse of these clocks is derived from the characteristic frequency of radiative transitions of the electrons of free atoms, and their time display is continuously compared with and adapted to the clock. Worldwide, more than 400 atomic clocks are operated in 80 time institutes, which are regularly compared to each other. Based on this comparison a kind of "averaged" time scale is calculated, which is called the International Atomic Time (TAI) and is used worldwide. The TAI is also the basis for the Coordinated Universal Time (UTC).

How atomic clocks work and what types are used

In October 1967, the definition of the second in the international system of units (SI) has been based on a ground state transition in cesium atoms. The transition frequency of the cesium atom has been fixed to 9,192,631,770 Hertz. Today, beyond cesium the most common atoms for atomic clocks are rubidium, hydrogen, and more recently strontium, aluminum, and ytterbium in optical clocks (see below).

The performance of so-called optical clocks has already outpaced the performance of cesium clocks. The above-mentioned strontium, aluminum, or ytterbium atoms are used in optical atomic clocks, which exploit optical transitions occurring at frequencies in the THz range. The accuracy of optical clocks is often illustrated by the fact that they would be less than 1 s wrong today if they had been running since the big bang. After all, the big bang took place about 13.8 billion years ago. Optical clocks are able to divide given time intervals into much finer intervals than cesium clocks and for this reason, have long been under discussion for an even more precise definition of the second. However, the operation of optical clocks is even more demanding, so they have not yet superseded cesium clocks. In addition, they are technically implemented very differently.

Consequently, there is a great need to compare atomic clocks with each other - and this also across larger distances.

A further increase in precision is expected from nuclear clocks, which are supposed to use an excited state in the atomic nucleus itself instead of the excited states in the atomic shell. The atomic nucleus is about ten thousand times smaller than the electron shell and much more stable against external influences such as a magnetic field or temperature changes, or electromagnetic interference. A technical disadvantage is that electromagnetic fields with very frequencies are required to reach other energy levels. Currently, thorium is a promising candidate for the construction of a nuclear clock, since ultraviolet radiation could already be sufficient to produce exited levels in these atoms. Various thorium clock concepts are investigated and discussed in the literature, but until today there was no success to excite the nuclear transition by a laser since the transition energy is not known precisely enough. 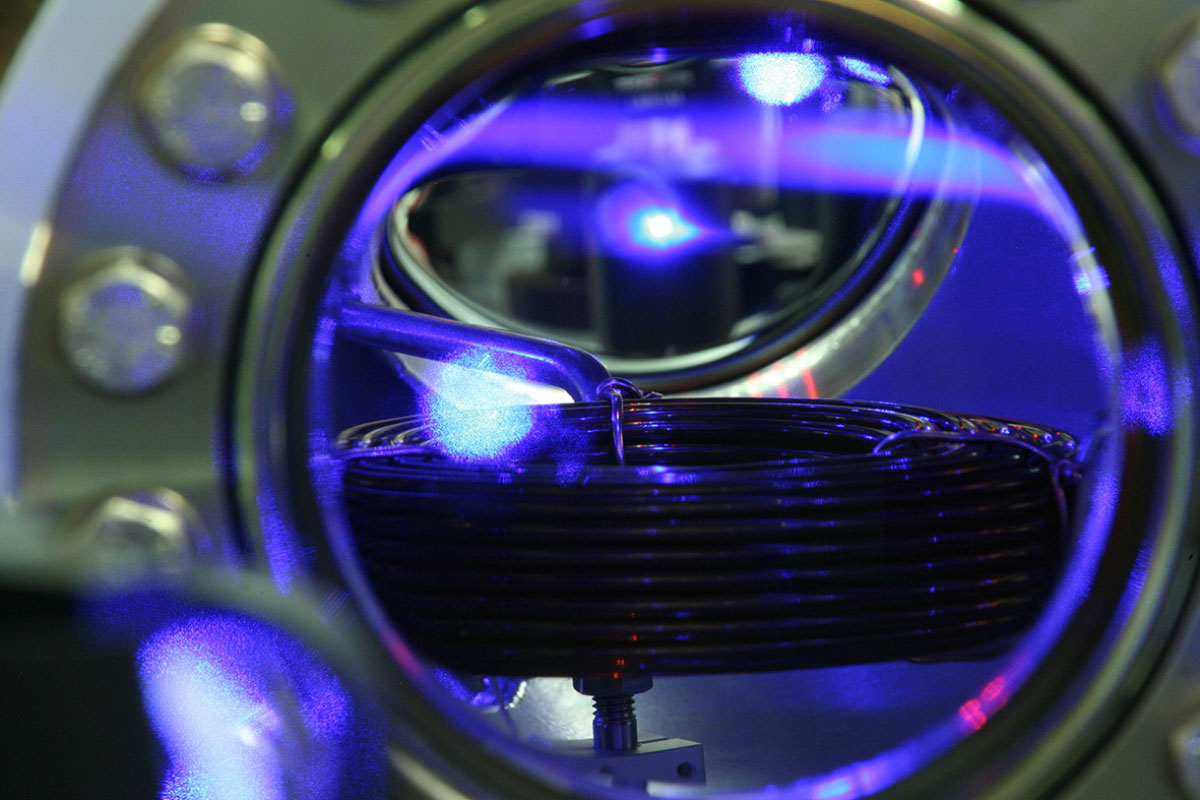 How are atomic clocks synchronized?

‍
The availability of GPS time comparisons was a significant step to compare distant atomic clocks. The above-mentioned satellite network provides besides the position data for navigation systems also the exact time signals and is therefore basically suitable for the time dissemination and for the comparison of time scales. For this purpose, a GPS receiver in each time institute is synchronized with the UTC of the institute and the time difference between this time indication and that of the satellite GPS is calculated. In this process, each satellite transmits the system time as a reference together with the value from the time scale of the individual onboard atomic clock and the current position data. Thus, the relationship between the individual satellite clock and the system time can be used in a time comparison.

Using this method, if several institutes determine time differences from observations of all satellites during one day and exchange their results, this allows the calculation of the average time difference. However, this method has systematic disadvantages, especially because the satellites emit only a weak signal. Consequently, the data might be manipulated by spoofing or spamming.

‍
Therefore, the method of two-way satellite time and frequency transfer (TWSTFT) has become more established today. In this approach, two time institutes simultaneously send timestamps at an agreed time to each other via a geostationary telecommunication satellite. These timestamps provide the exact send time according to the self-measured atomic time. At the time of sending, a TDC is started at each of the two transmitters and automatically stopped as soon as the signal of the other institute is received. By comparing the transmission times according to the atomic clock of one institute with the transmission times according to the TDC of the other institute, the frequency or time difference of the two distant atomic clocks can be determined. In this process, the measurement is independent of the position of the two institutes and the satellite, since the delays acting on the signals usually affect both signals equally. Consequently, they neutralize each other in the computational comparison. 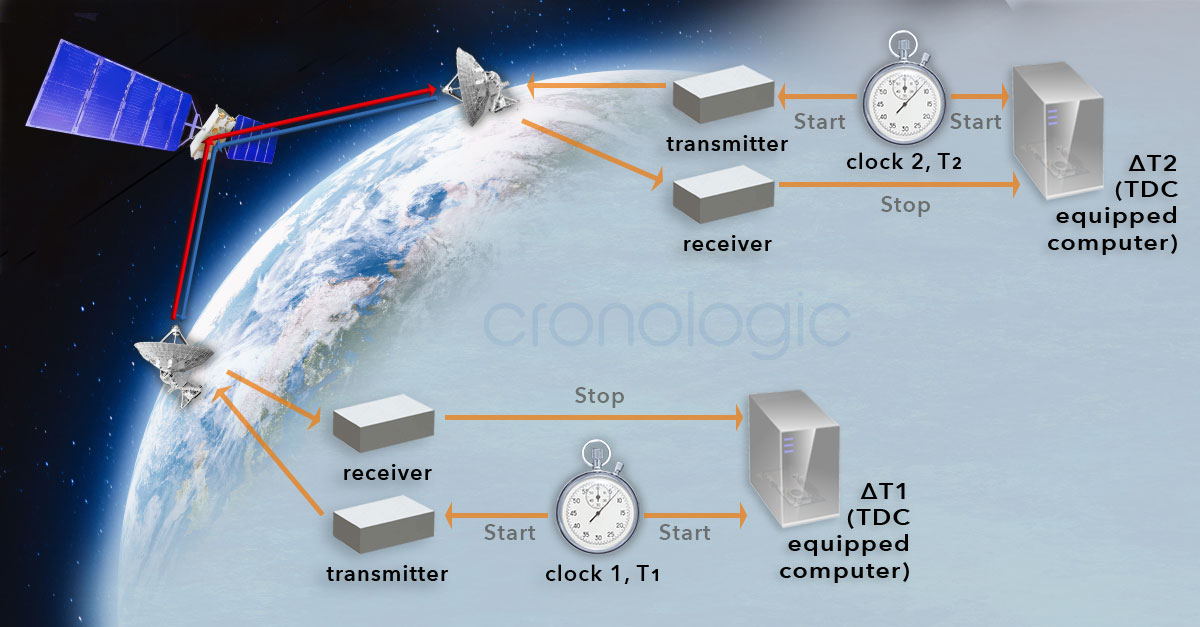 Satellite links are not adequate for the comparison of optical clocks, because the achieved better precision of the time signal is lost in the noise of the transmission. This sparked the idea of coupling several optical clocks via laser beams transmitted by fiber-optic technology. The approach has already succeeded in several experiments, including one in Boulder in 2021 with three atomic clocks located about 1.5 kilometers apart, which could be precisely synchronized with each other over a period of eight months. The measured clock rate differences were only noticeable after the seventeenth decimal place, which corresponded approximately to the accuracy of each individual atomic clock. The long-term goal is to build a global network of optical atomic clocks.

What is the benefit of the extraordinary accuracy of atomic clocks?

Even if most people think that a time measurement accurate to the second is sufficient for them in everyday life, we all benefit indirectly from the existence and the global synchronization of atomic clocks. This is not only because they set the pace for radio-controlled clocks and station clocks. Exact time measurement plays a major role in research in particular, but also in world trade and navigation, for example. There are many examples of applications, some of which we would like to mention here.

Many thanks to Dr. Stefan Weyers, Head of the "Unit of Time" working group @ PTB for his extraordinary support of this article.